Windows 7 Extended Support Ends in 2020—Are You Ready? 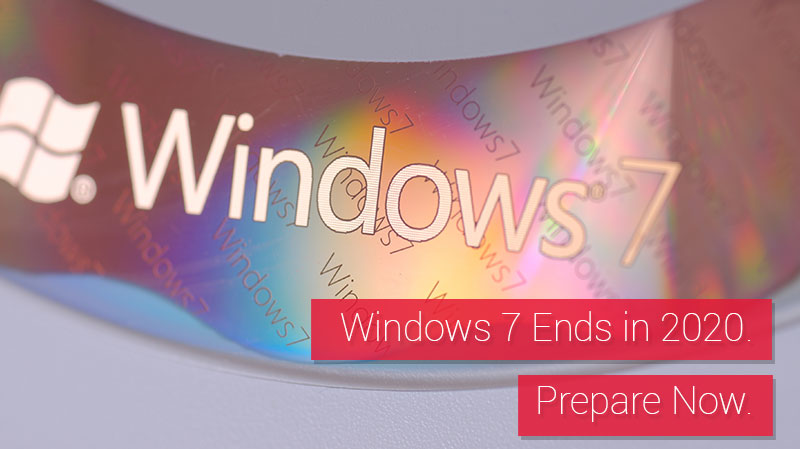 Windows 7 hasn’t been officially supported since 2015, and a surprising number of companies are still using it with security patches offered during the Windows 7 extended support stream of patches. But all things must come to an end, and Windows 7 extended support is scheduled to end in January 2020. Firms must face a choice: limp along as security concerns continue to mount and accept the bug risk or slowly upgrade to newer versions of Windows.

It’s time to put the upgrade plan in place while there is time for a measured and slower pace to a technical upgrade. For those wondering, when is Windows 7 no longer supported, the official date is in January of 2020. While devices will continue work, without the protection of ongoing security patches and updates, it’s best think of that time as cushion in case the upgrade takes longer than necessary.

Why hurry? After Windows 7 goes dark, the machines running it are on borrowed time as vulnerabilities will continue to mount. This is particularly true of security vulnerabilities that will rapidly be released to take advantage of systems running patchless Windows 7.

Imagine some nefarious sort hanging out in the dark and dusty corners of the internet; this is just the kind of opportunity they’ve been waiting for: static systems with increasing decay that could contain vulnerabilities susceptible to ransomware and other threats.

Even if firewalls and other network security measures are kept up to date, there is still exposure. It’s like putting thousands of dollars in a cardboard box behind a security fence. No matter how high the fence is, once the bad guy has scaled it, they only have the cardboard between them and the cash. That also assumes that network upgrades will continue to account for Windows 7 as new things are discovered, which is unlikely to last. Network and security software will not and cannot fully support a system that’s no longer being supported by its own creator.

Why start the upgrade now? If a company uses more than a handful of machines, it can take months to upgrade the OS for each computer. It can take several hours to upgrade an OS and reconfigure the user’s settings, then reinstall necessary software and connect to various network resources (such as shared drives or printers).

That means a single IT Support Specialist can do just a few machines per day. It also means making sure machines are provisioned for users who will experience downtime on their usual machines so that they don’t lose productivity. Being proactive gives your IT provider sufficient time to formulate and execute a plan for the upgrade process and see it safely through to the finish line before systems become vulnerable, while also minimizing downtime for employees during the transition.

It’s a less frustrating and ultimately, an easier transition. It’s worth noting that Windows 8 is no longer supported either, with Windows 8.1 soon to follow. With Windows 10, Microsoft appears to be moving to a different versioning model, too—one similar to Apple’s macOS versioning model.

Microsoft has a goal of Windows 10 being the OS for one billion devices. One billion. That’s a lofty goal. To get there, all their resources need to be focused on Windows 10. In fact, since 2016, consumers could only buy new machines with Windows 10.

Windows 7 and 8 are outdated and have been relegated to the ‘extinct systems’ wing of the Computer History Museum. It makes good business sense that the company is focusing on support and patches for the standard bearing software, Windows 10. This keeps resources available to stay on top of bugs, security issues, and new devices as they grow toward that massive number of machines.

Frankly, Windows 7 users were lucky to get an extension for as long as they did. For years companies received regular Windows 7 updates and patches, but it’s time to move forward.

IT professionals can get swamped with the Windows 7 enterprise end of life transition. Between loaner machines and training new users, there’s a lot of work outside the actual installation process. Reach out now to discuss critical upgrades first and make a solid plan for your company to minimize the friction points during the upgrade.