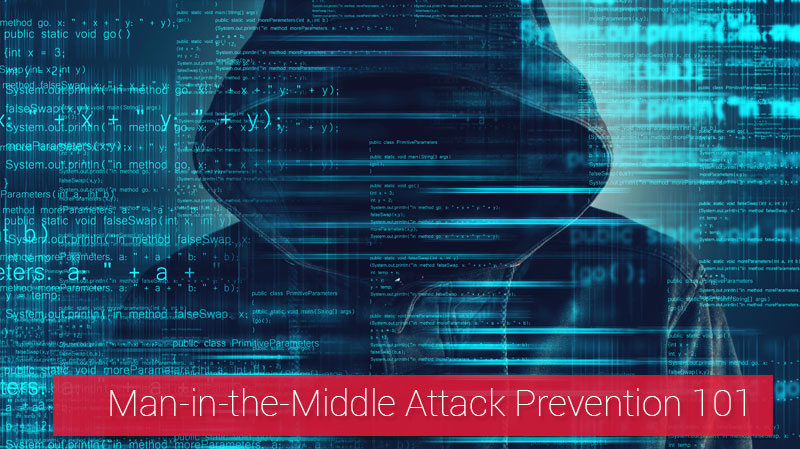 Has your IT provider gotten around to developing a man-in-the-middle attack prevention plan just yet? If not, they need to do so—now. Man-in-the-middle (MITM) attacks are another in a long list of schemes hackers use frequently, and companies are surprisingly vulnerable to them.

It seems like every day cybercriminals are coming up with clever new ingenious ways to separate data from the companies they targets. MITM attacks are just the latest in a long saga of nefarious innovations.

With 43 percent of all cyberattacks targeting SMBs, and costing each around $200,000 on average, companies can’t afford not to stay abreast with the latest trends in cybersecurity, even if that’s a full-time job on its own. Read on to learn about the nature and prevention of MITM attacks to help keep your company safe.

What Is a Man-in-the-Middle Attack?

In a nutshell, a MITM attack is a type of eavesdropping attack where a hacker hangs out on a network and intercepts traffic as it’s transmitted from point to point. A hacker may be simply listening to network traffic. He or she may also engage in active eavesdropping, where communications are intercepted, manipulated, then handed off between two connections as if they were communicating directly.

It’s a lot like a third party listening in on a telephone conversation but neither of the two individuals knows that the third person is there. Any sensitive information passed during that phone conversation—such as login data, credit card numbers, or trade secrets—is intercepted and stored by the hacker.

Any insecure network is susceptible to an MITM attack. This might include:

The Value of a VPN

Occasionally, an employee may find it necessary to connect to a public network in order to perform business tasks. Whether the employee is working from the road or on a business trip, circumstances arise where public networks are unavoidable. One of the first lines of defense against eavesdropping attacks while outside the company network environment is the virtual private network (VPN). A VPN encrypts and obscures network traffic using a “tunnel” so that it can’t be intercepted and viewed by outside parties. Since it works from endpoint to endpoint, secure VPN traffic is difficult to capture by unauthorized third-parties.

Using a VPN is a best practice for any corporate computers that may be used outside of the office. Although accessing business information on a non-business device or network is never ideal, this kind of access is virtually impossible to avoid.

Likewise, many remote workers enjoy working in diverse environments, but this terrain comes with public networks of questionable security. Public networks, such as those at a coffee shop, are especially vulnerable to eavesdropping because they’re frequently open (lacking password protection) or lacking basic privacy mechanisms. In these circumstances, the use of a VPN is a crucial step for protecting sensitive information.

A VPN is an excellent tool to prevent MITM attacks, but it’s just one of many techniques that a company can adopt. Since MITM attacks take advantage of visible, unencrypted or under-secured networks, consider some of these following tactics.

Network segmentation is a practice that splits large networks into smaller ones, typically limiting or preventing access and communication between one network and another. Many companies use network segmentation to split the part of the network which is publicly available from the network which employees use to communicate with one another (think “guest” networks). Companies may offer guest networks to customers for convenience, but segmentation is critical in these scenarios! Non-company-owned-devices—such as tablets or cellphones, even those owned by company employees—should never be allowed to connect to a company’s primary internal network.

Use Encryption on All Networks

MITM attacks can target more than just networks through which computers connect to the internet. Deploy encryption on networks used by printers or other office devices to ensure that jobs can’t be intercepted and stolen when they’re sent to print.

Since MITM attacks may masquerade as legitimate connections, practice a zero-trust security model. This requires users to authenticate themselves each time they connect to the network regardless of who or where they are. With zero-trust, it’s more difficult for hackers to pretend to be someone else because they need to prove their identity to access the network in the first place.

Managed IT services can help a company harden its network and develop man-in-the-middle attack prevention strategies. Consider enlisting the help of a managed IT service provider for a security assessment to discover where networks are susceptible to these kinds of attacks.

Man-in-the-middle attack prevention starts with securing a network so that outside users cannot access it without going through the proper authentication procedures. A security specialist like CDS can help companies develop a framework which includes not just state-of-the-art security, but also training in best security practices for employees to follow to enhance existing security features. With a specialist on the company’s side, threats like MITM attacks can be prevented and eliminated before they have a chance to occur.

CDS helps Illinois companies, governments, and organizations harden their security infrastructure to stay safe in the era of cybercrime. Contact us today for an assessment of your current cybersecurity strategy.