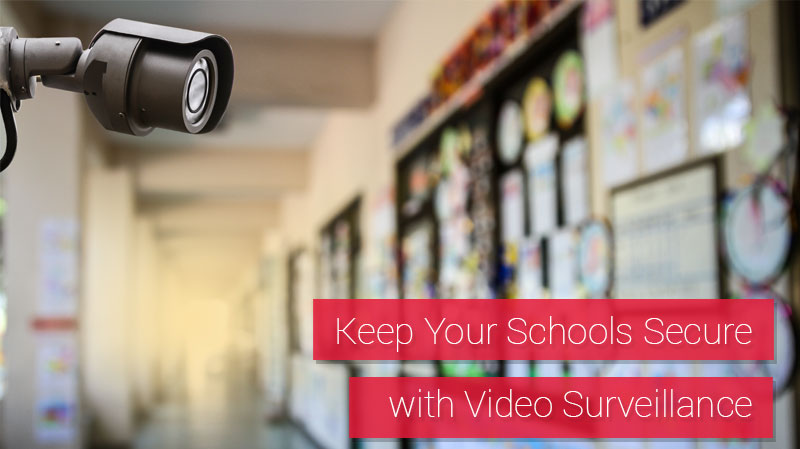 Students, parents, teachers, and staff expect that school districts provide for them a safe and secure educational environment. That means securing school buildings from weapons, violence, and unwanted behavior.

School officials employ many methods to protect their facilities. One of the most effective security measures is the use of video surveillance, which is used by a majority of school districts across the U.S.

Why Building Security is Important to Schools

School isn’t as safe as it used to be. Newspapers and social media are rife with reports of student fights and other acts of violence that threaten the safety of students, teachers, and staff.

According to the School Survey on Crime and Safety, schools reported 962,300 violent and 476,100 non-violent incidents (PDF link) during the 2017-2018 school year. More than 70% of all U.S. schools reported at least one violent incident, and two-thirds reported at least one physical attack or fight. There were more than 3,600 incidents involving the possession of a firearm or explosive device.

School shootings, while less common, are also on the rise. The K-12 School Shooting Database reports that shootings in U.S. schools increased from 15 in 2010 to 39 in 2015 to 112 in 2019. This disturbing trend shows no sign of abating.

According to the National Center for Education Statistics, the most common approach to school safety, used by 95% of U.S. schools, is to control access to their buildings during school hours. This is typically done via the use of security gates and so-called hardened entrances. The goal is to keep out unauthorized guests.

Recent statistics show 83% of schools nationwide installed security cameras in and around school buildings. Schools use these cameras to monitor school buildings and school grounds for suspicious activity.

The same report found that 70% of schools require faculty and staff to wear badges or picture IDs. Furthermore, 61% of schools have security staff present at least once a week.

Everyone wants to protect students. Video cameras help do that.

Video surveillance is the second-most common approach to school security. Here are some of the key reasons why the use of surveillance cameras is so prevalent in schools today.

Installing conspicuously-placed surveillance cameras has been shown to deter various types of unwanted activity. This includes criminal activity, such as vandalism and theft, and less major offenses, such as smoking and unwanted gatherings. In many cases, the risk of having one’s face recorded on tape is enough to deter many people from misbehaving.

Surveillance cameras can also catch criminal and other unwanted behavior in action. Students or other individuals entering out-of-bounds areas can trigger motion-activated cameras, with alerts sent to security personnel to check out said areas for suspicious behavior. These automated security cameras keep working even when the school is closed overnight or for long breaks.

By hardening entrances and requiring background checks, schools are taking a more active role in monitoring visitors to their buildings. Video surveillance is a useful tool for monitoring visitors, not just at the entry door, but also as they travel throughout the building. It’s important to know what visitors are doing and where they’re going.

Bullying is a serious problem in schools today. The presence of surveillance cameras encourages all students to be on their best behavior and can discourage bullies from acting out. Some schools have reported a 70% decrease in bullying activity after installing video cameras in hallways.

Surveillance cameras are useful in alerting staff to signs of potential drug use by students. You can identify high-risk students and those exhibiting behavior associated with drug use for intervention. Cameras can also be used to monitor less-traveled areas where drug activity might take place.

Finally, the presence of surveillance cameras provides peace of mind to teachers, school officials, and parents. All concerned will rest easier knowing schools are proactively monitoring suspicious individuals and watching for unwanted behavior. Everyone wants to protect students. Video cameras help do that.

Turn to CDS for Your School’s Video Surveillance Needs

A professionally-installed video surveillance system helps provide a safe and secure environment for students, teachers, and staff. CDS Office Technologies helps you select the equipment and services you need to install and fully implement an effective video surveillance security system for your school.

We also offer systems that integrate with temperature scanning cameras and facial recognition systems to safeguard against the spread of the coronavirus. Let our trained staff help you find the right solution for your institution.